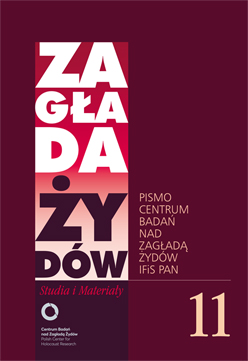 Summary/Abstract: The text discusses the court 􀏐iles of the trial of an Oświęcim Camp Security guard, who in 1946, while on duty, shot an individual suspected of profaning remains of victims of the Auschwitz camp. This case remains the only known and such well documented instance of a killing of a ‘Canada man’ (Kanadziarz) by an employee of the Auschwitz Museum. The documents were produced by the Magistrate’s Court in Oświęcim, the Regional Court in Wadowice, and the Appellate Court in Cracow, where the security guard stood trial. The procedural materials, which include reports on interviews with witnesses and the defendant, the sentences passed by the two instances and their interpretations, and the appeals, are stored in the Archive of the Cracow Branch of the Institute of National Remembrance. They show how the territory of the former camp in Auschwitz was protected during the 􀏐irst years after its liberation. Moreover, they are a valuable source when it comes to research on profanation of remains of victims of the Holocaust and the former concentration camps.