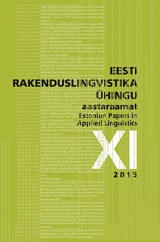 Summary/Abstract: This study focusses on external factors of second language learning (L2) and their effect on L2 sound production. The aim was to find out whether young adults whose first language (L1) is Estonian speak L2 English with less accent than older speakers of L1 Estonian. Prior studies have claimed that more exposure to the target language lessens the effect of L1 interference (internal factors) (e.g. Piske et al. 2001, Muñoz, Llanes 2014). An apparent-time study was implemented in order to test whether a change in learner setting (i.e. limited exposure to the target language vs. abundant exposure) shows any evidence which can be explained by such external factors. Data was elicited from the speech samples of 97 speakers of L1 Estonian and L1 interference effects were analysed sound by sound. The results show that the younger generation displays less L1 Estonian interference than the older generation. Both greater exposure to the target language and earlier age of L2 learning onset correlate with the ability to produce more sounds target-like.*