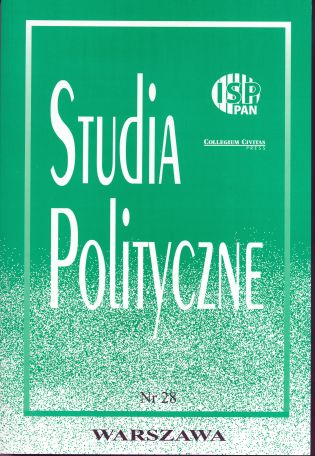 Summary/Abstract: The article aims to analyse the phenomenon of instability of electoral behaviour. Both the floating citizens (those who change their party preferences) and the unstable ones (those who change between voting and absenting themselves) are subjected to scrutiny. The authors would like to learn whether the electorally unstable citizens (both the floating and the uninterested are different from the rest and, if so, in what manner. Primarily, however, they would like to learn whether these two groups are different from one another (and if so, in what manner). Data from the Polish National Election Study, PGSW 2007 are used in the empirical studies. The authors’ analyses indicate convincingly that instability of electoral behaviour is related to social stratification, satisfaction with the government and democracy, interest in politics and party identification. They identify two mechanisms causing people to depart from the parties they have voted for previously. Disinterest affects those who are deeply disenchanted with not only their party, but also the entire political system. It may, however, result from the lack of an alternative to which a person might transfer their support. An alternative remains unfound not only by those voters who are less well prepared for finding themselves in the world of politics, having, for instance, an inferior education, but also by those who deliberately isolate themselves from knowledge and are not interested in politics. In turn, floating electoral behaviour does not have to mean that a given voter is disenchanted with the system. Some of them, simply, make a better choice. In order to be able to do this, however, they must be prepared in an appropriate manner (to be appropriately positioned in the social structure) and be willing.