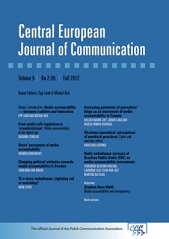 Summary/Abstract: This paper seeks to explain the potential impact of new forms of media accountability in the digital age (i.e. media blogs and media criticism via Twitter and Facebook), as well as the failure of many traditional instruments of media self-regulation (i.e. press councils and media journalism) from a theoretical perspective. North’s theory of institutions will be employed to analyze why traditional instruments of media self-regulation oft en cannot successfully monitor and sanction deviation from professional standards in journalism. Drawing on institutional economics, a media accountability model including the audience in the digital age will be developed as an alternative. Th is audienceinclusive model may prove more eff ective in the long term, as ‘costs of complaint’ sink, and the utility function of the new ‘digital media critics’ may result in a more eff ective media criticism. The paper concludes with implications for media policy