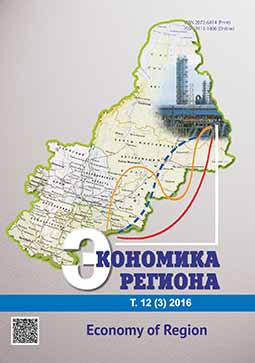 Summary/Abstract: In the article, the theoretical and economic aspects of the category “security” are considered; the distinction between philosophical and socio-economic approaches to the understanding of social security is drawn. From the point of view of the system approach, the place of social security for national security protection is determined. The theoretical content of the category “social security” is shown; in the authors’ treatment, the specifying concepts such as “social risks”, “danger”, “threat” are given. For the purpose of risks identification (deviations) and the revealing of the factors of inefficient financing, the methodological tools for the assessment of the social security of a region are proposed. These tools are based on the integrated assessment of the regional socio-economic indexes and the indexes assessing the budgetary financing of the territory. The methodical approach offered by the authors is based on the detection of dependencies between the social and financial security of a region. As estimates, the indicators reflecting the level of social security in the territory of residence are chosen: income, expenses of the consolidated budget of a region, growth rate of gross regional product, rate of natural population growth, level of unemployment, population share with the income below living level. This approach is approved on the example of Perm Krai and Sverdlovsk region; the regularities, the favourable and adverse periods for social security of the region are revealed. The received estimates are ranged depending on a temporary log of growth (fall), elasticity and sensitivity to the budget financing. The results of the assessment have shown that, from the point of view of social security protection, Perm Krai has entered a stage of deep recession, which started in 2012. Similar tendencies are observed in the Sverdlovsk region. Nevertheless, considering both a visible variety and the dominating influence of Perm Krai and Sverdlovsk region on the social and economic development of the Volga and Ural Federal Districts respectively, the given comparison is of scientific and practical interest.