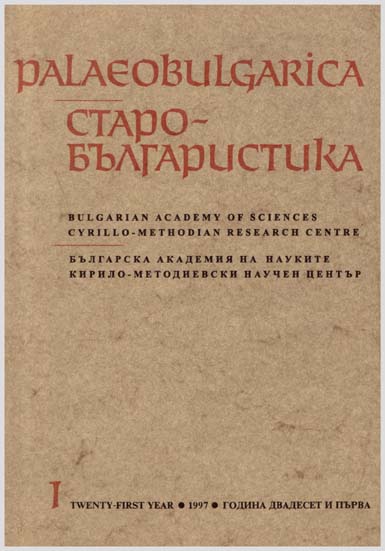 Summary/Abstract: The paper focuses again on the bronze processional cross of the hill of Trapesitsa in Veliko Tarnovo, published 25 years ago and dated, according to its palaeographic characteristics and inscriptions (in Greek and Bulgarian), to the end of the 12th or the beginning of the 13th centuries. On the basis of comparative analysis with regard to its shape, size and decorations, to a number of Byzantine processional crosses, important particularizations as to its workmanship in the 10th century are added, which in fact is synchronic with the Greek text where the Constantinople provenance of the cross is unequivocally stated. The Cyrillic inscription of the 13th or 14th century is devotional in character and shows the second use of the cross as processional in the years of the Second Bulgarian Kingdom. Besides, it is linked to the personality of Sebast Berislav, who, in all probability donated it to one of the numerous churches on Trapesitsa hill in Veliko Tărnovo.