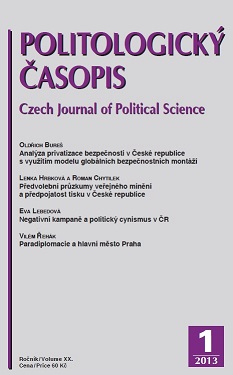 Summary/Abstract: With reference to ideas presented in the theory of media malaise, the article aims to assess the role of negative campaigning in Czech elections and to analyse how it is perceived by voters, how it correlates with electoral preferences, and other important variables. The analysis is based on data from the Czech Election Survey 2010. The author draws from the causal relationship formulated in the above mentioned theory, according to which the effect of the news media and their emphasis on negative news and negativity contribute to growing political cynicism among citizens. Negative and conflicting media news, which are even more intense during election campaigns, activate the spiral of public cynicism and cause public trust in political actors to fall, as well as alignment and voter turnout (Cappella and Jamieson 1997). The author attempts to test the hypothesis: The more people watch the media and the more they are exposed to election campaign coverage, the greater is their political cynicism.