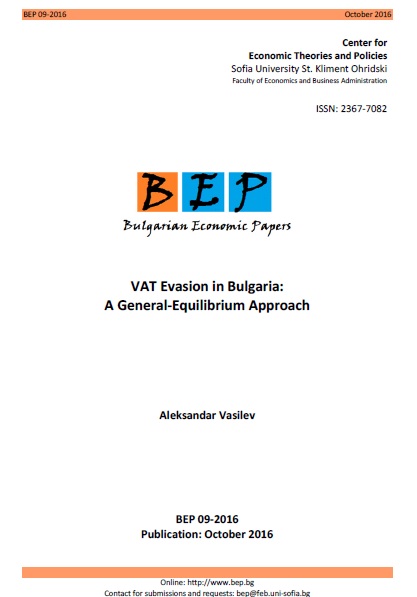 Summary/Abstract: This paper utilizes an otherwise standard micro-founded general-equilibrium setup, which is augmented with a revenue-extraction mechanism to assess the magnitude of VAT evasion. The model is calibrated to Bulgaria after the introduction of the currency board (1999-2014), as one of the very few countries in Europe with a non-dierentiated consumption tax rate, and an economy where VAT revenue makes almost half of total government tax revenue. A computational experiment performed within this setup estimates that on average, the size of evaded VAT is a bit more than one-fourth of output, an estimate which is in line with the gures provided in both Philip (2014) and the European Commission (2014). In addition, model-based simulations suggest that increases in spending on law and order could generate substantial welfare gains by decreasing VAT evasion.