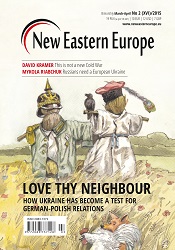 Summary/Abstract: From the beginning of the Ukrainian crisis in 2013 Russia has been able to attract a wide range of sympathisers across Europe. But today’s Russian propaganda, though more cynical and professional than Cold War Soviet propaganda, is far from omnipotent. The Kremlin may know how to exploit our foibles; but it does not really understand the West.