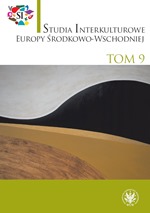 Summary/Abstract: The article analyses the volume of poetry by Roman Honet, alicja, by meansof the method of analysis and interpretation of a literary text proposed by JerzyFaryno. The division into primary content (direct, resulting from a linguisticutterance) and secondary content (resulting from a linguistic utterance indirectly)enables one to attempt to interpret uninterpretable, as it is considered in theliterature on the subject, alicja. The structure of the volume itself, specificpunctuation and grammar provide certain conditions concerning the image ofpoetic reality existing in the world presented by the lyrical I. What is more, thesame motives appearing again and again, specific meta-oneirism, permanentpalette of colours became a starting point for developing our proposal. This approachto the problem was also supported by thematic triplicity of poetic contentvisible in the poetry. The further part of the article presents intertextual referencesto the extratextual reality and real historical figures (related to the SecondWorld War).