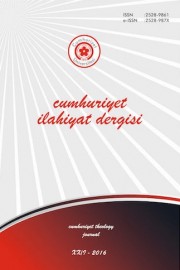 Summary/Abstract: The overall objective of this research is to determine the religious perceptions and its levels of university youth and to interpret the findings from the point of view of their psychological features. This research consists of four chapter. These are: introduction, first chapter consist of discussions of the basic concepts such as religiosity, spirituality, second chapter that the data obtained from the survey was assessed the relationships with hypotheses and conclusions in which the findings were interpreted. The study’s population consists of the students at the undergraduate level in faculties of the Erciyes University in 2011-2012. A questionnaire was administered on 553 students, chosen randomly in this population. The survey contains descriptive and Likert style items. As independent variables in this study, branches of science, faculty, department, class, age, gender, living environment for the longest time before coming to university, graduated high school, mother's and father's education level and the accommodation place during training have been taken. When analyzing the data, percentages, frequency distributions, descriptive statistics, analysis of variance (one-way ANOVA) and T-Tests and Chi-Square (x²) techniques were used. As a result of this research hypotheses associated with gender, age, branches of science, faculty and department were confirmed on the other hand the others were rejected.