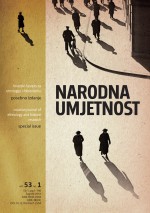 Summary/Abstract: This paper problematizes the relationship between the working and middle classes in socialism, which was characterized by consumer culture and state of welfare. It also tackles the extinct middle class in the post-socialist context of the economic crisis and economically defined but politically void "new" working class. The economic realization of the Yugoslav socialist model - a hybrid of planned and market economies - combined the capitalist idea of the state of welfare with the communist execution of social rights. The socialist consumer culture, "searching for welfare", established a homogenous middle class as a proof of its own social success, leaving the "working class" to be conveniently invoked only in ideological manifests of the governing nomenclature. The discussion about the capitalist restoration of the post- socialist period gives precedence to the lament over the extinction of the middle class and its high standard of living over the issues of class relations. On the other hand, the majority of the 286,075 unemployed and 15,230 of the employed who did not receive their salaries in the first quarter of 2015 are low-skill or vocational work- ers, i.e., the working class. This new relationship between the working and middle classes problematizes the socialist inheritance of transformation of the working class into the middle class, the recent phenomenon of economically defined working class without a political meaning, the post-socialist class inequality between the employed and the unemployed, and the emancipation of the worker as "the scorned subject" and his mobilization without being necessarily included in the middle-class political activism for the "general good".