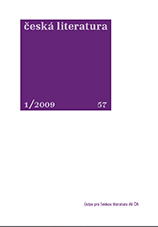 Summary/Abstract: The article has two aims. First, it endeavours to define the limits of authorship in Karel Sabina (1811–1877) and Jan Erazim Sojka’s (1826–1887) Naši mužové (Our fighters, 1862–63), a set of twenty biographical sketches of Slav writers (and one Irishman). Since it has to have as its starting point the most important analysis of this work – Alexandr Stich’s Stylistické studie III: Sabina, Němcová, Havlíček (1976) –, the article also constitutes a critical commentary on Stich’s book. Stich analyzes only two chapters of Naši mužové in detail – those about Havlíček and Němcová. In addition to Stich’s remarks on the Havlíček essay, this article discusses the origin of the essay with reference to important material that Stich either did not know or ignored – namely, Sojka’s original version of the article in Zábavník Lípy českomoravské, which Sabin comprehensively edited for Naši mužové, as well as Sabina’s manuscript criticism of Havlíček’s biography by Alfred Waldau (1837–1882) and Waldau’s Die Bewegungen in Prag im März 1848 (1859). Sabina’s considerable share in writing the text is thus more precisely determined; Stich’s argument that the quotations from Havlíček’s articles in Naši mužové may have been deliberately altered is not challenged. The article also reproduces Stich’s analysis of the volume’s essay on Němcová, but takes issue with some of his conclusions. It also mentions various polemics with Stich on his method (particularly, Josef Šebek’s) and his sources (Jaroslava Janáčková’s taking issue with Stich’s suspicion that four letters of Němcová’s, which we know only from Naši mužové, were forgeries). In particular, the author of the article agrees with Stich’s unfinished argument about the possible interpolation of literary allusions in the four letters, and presents an analogous example of Sabina’s changes to Eduard Hindl’s (1811–1892) letter to the publican Svoboda in Sabina’s ‘Úvod povahopisný’ (Character sketch by way of an introduction, 1845) to Mácha’s Collected Works. On the basis of style analysis and other tools of textual criticism the article concludes by attributing the individual parts of Naši mužové to Sojka or Sabina, and considers the circumstances in which the book was written. The author, in contrast to Stich, reconfirms that the editor of the volume was Sojka, who for the most part, however, used material sent to him by Sabina; Sojka then frequently altered this material, particularly in each essay’s introduction or conclusion, usually to their detriment. On the whole, one may attribute to Sojka the authorship of about one-third of Naši mužové, but the principal author was Sabina. The fact that Sabina was not involved in the final manuscript of Naši mužové and remained anonymous probably demonstrates that Stich was mistaken in saying that Sabina was clandestinely using the book as a contribution to the Sabina cult.