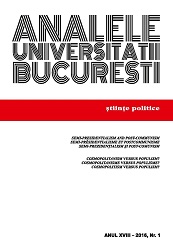 Summary/Abstract: The present paper questions one of the widespread diagnostics of European and North-American politics, according to which the emerging political cleavage – in the wake of the dissolution of the classical left-right distinction – pitches different declinations of sovereignty-focused populism versus various forms of cosmopolitan transnationalism. In the European case, this form of political cleavage is deemed to explain some of the current reconfigurations of member states’ policies and political parties in relation to immigration, as well as an increasingly popular contestation of the EU exemplified by Brexit; in the US, it would explain the rise of political figures such as Donald Trump. Against this popular view, this paper seeks to shed light on a more nuanced understanding of the dichotomy, grounded on Robert Dahl’s original distinction between the scope and the domain of democratic politics. Whereas the opposition holds when it refers to their incompatible notions of legitimate political membership, it becomes much less coherent when viewed as pertaining to political agency.