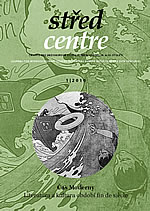 Summary/Abstract: First of all, the study differentiates between the concepts of “modernism” and “progress”, emphasizing that modernism is always linked to disruption of existing values and discovery of “low realness of reality” (Lyotard), while progress is based on the idea of a continuing upward process. The Czech Modernism in 1880’s and early 1890’s crystallized in heated polemic clashes that passed from science into politics. Literary works set the ideological sphere in motion, the art turbulently reflected political events, the science destructed national mythology, which had been so far perceived as constitutive for the whole national community. Literature and criticism experienced a radical turning point, which was obvious for instance in the shift toward the image of an individual losing identity and being exposed to destructive pressure of society. The Czech Modernism Manifest of October 1895 marks the end of mutual influence of oppositional forces. The extensive proclamation attempted to summarize the up-to-date literary, social and political debate and accentuated the social progress of different forces. The study explores individual streams that mingled in the proclamation: the Masaryk-type criticism (realism), cultural and social attempts of progressive movement and position of young literary critics. The common platform emerged from weaknesses of individual streams but as soon as some relative point of consolidation of the Czech society was reached, the specific features of various spheres came forth.