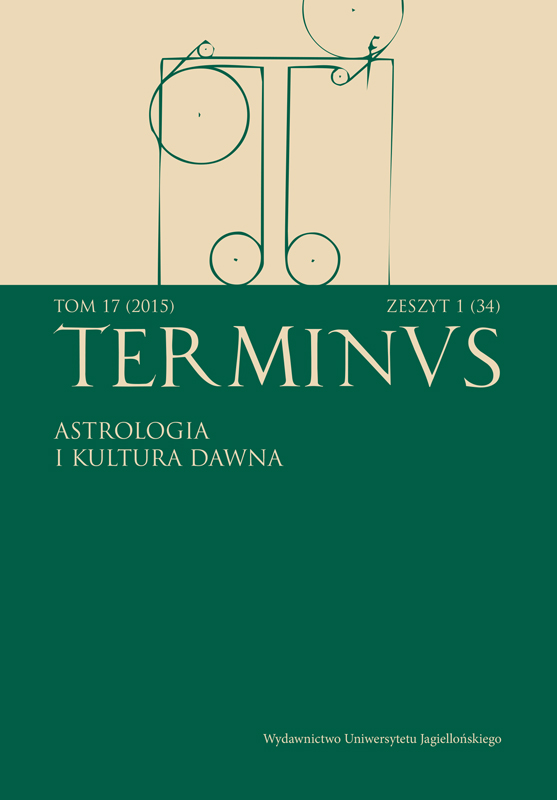 Summary/Abstract: This article aims to demonstrate – using selected examples of English Medieval poetry as well as Polish Renaissance and Baroque works – the way poets applied their knowledge of astrology, which modern researchers define as metaphor. Astrology, the study of the geocentric Cosmos, today a historical science, was ultimately formulated in Ptolemy’s time. As one of the seven liberal arts (septem artes liberales) it constituted the basis of education from late Antiquity to Medieval universities, surviving until as late as the 18th century. The literary works produced from ancient times till the modern era, whose authors use their knowledge of astrology, can be divided into three groups. The first includes the works which in rhymed form convey the knowledge of the Cosmos, for example, the Phaenomena of Aratos of Soloi, Aratea by Cicero, by his brother Quintus, by Germanicus and by Avienus as well as the lost Aratea of Ovid, Hyginus’s De astronomia, the poem Astronomicon of Marcus Manilius, and also Keter Malkhut written by the Andalusian Jew Solomon ibn Gabriol, known as Avicebron. Ovid’s Fasti and Metamorphoses belong to the second group in which the knowledge of astrology is accompanied by the mythological prototypes, that is, Greek gods and heroes, of planets and constellations and also by explanations of mythological stories in relation to the appearance above and disappearance below the horizon of the celestial bodies which bear their names; there, too, we find the system of calendar holidays and annual rites. The planets and constellations in these works are the Greek gods and heroes “transferred onto the sky” as a reward for their service and virtues on earth (Greek katasterismos). The third group embraces writings in which the structure of the Cosmos itself has become the basis for composing a poem. They are defined as stories embedded in a Chinese box structure. The characters and their tales form chains linked in imitation of astrological treatises, each chain opening with a planet or a sign of the zodiac. The precursor of such stories was an Andalusian Jew, Pedro Alfonso of Huesca, who was baptised in 1106 and subsequently resided at the court of Henry I in London, where he wrote his Disciplina clericalis. In this group of Medieval writings the most famous are The Canterbury Tales by Geoffrey Chaucer and Boccaccio’s Decameron. The knowledge of the Cosmos is also reflected in such works as Sir Gawain and the Green Knight, the Arthurian tales, including the celebrated quest for the Grail, Le Roman de la Rose, and naturally Dante’s Divine Comedy and Milton’s Paradise Lost. In each of these groups the static spherical Earth is the central point of the Cosmos, around which there rotate seven planets and the sphere of the fixed stars, or Greek constellations; movement to them all is imparted by the Primum Mobile, in the Middle Ages identified with God the Father. The Cosmos is built of four elements which have their equivalents in the form of the four humours in the human body, four temperaments, etc. In its annual travel the Sun moves across the twelve constellations, that is, the twelve signs of the zodiac. In the development of Polish poetry on this subject an important role was played by Jan Kochanowski, who translated the Phaenomena of Aratos of Soloi, adding an invocation to God. In Mikołaj Rej’s Life of an Honourable Man, a poem modelled on the Zodiacus Vitae by Palingenius, we find an invocation to Divine Providence. Naturally, Ovid’s Metamorphoses were known to the Polish poets of the 16th and 17th centuries, such as Kasper Miaskowski, Mikołaj Wolski, Jan Gawiński, Zbigniew Morsztyn, Wacław Potocki, Wespazjan Kochowski, Wojciech Stanisław Chrościński, who translated Lucan’s Pharsalia into Polish, and Stanisław Słupski. In astrological treatises the planets and zodiacal signs formed chains of mnemonic associations, this additionally finding reflection in rhetorical dissertations, for instance, in one written by Kazimierz Jan Woysznarowicz. Man’s interest in the sky has accompanied him ever since he assumed an upright position and saw what was above his head. The Old Babylonian stories about Gilgamesh, about Gilgamesh and the Bull of Heaven in particular, as well as cosmological references in the Bible, the Egyptians’ practical knowledge based on the observation of the sky, the knowledge of the sky viewed from a philosophical perspective by the Greeks – from Plato, Aristotle and the philosophers of late Platonism onwards – and the Apocalypse of St John are incessant returns to this subject. The place where Christian, Muslim, and Judaic cosmological thought converged was Andalusia from the 10th to 13th centuries. That the catechumens in the 4th century knew more about the Cosmos than about the new Christian religion is testified by the sermons preached to them by St Zeno of Verona, who for mnemonic purposes assigned the figures of Christ, Mother of God, and the apostles to the signs of the zodiac. It was on the basis of cosmological knowledge that Pseudo-Dionysius the Areopagite wrote his works. The influence of the late-Platonic philosophy of Plotinus and Proclus as well as references made to the writings of the mythical Hermes Trismegistus found response in medieval mysticism, and the Cosmos became a subject for contemplation. This is best testified by the writings of Hildegard of Bingen and of the blessed Jan van Ruusbroec, the latter being a precursor of devotio moderna. Pierre d’Ailly in his Advent sermons preached from 1385 and also Jan Szczekna, confessor to Queen Hedvige (Jadwiga), wife of Ladislas Jagiello, referred directly to the Chaldeans, who were believed to be the earliest representatives of astrology. Fascination for the Cosmos did not end in the Middle Ages, but has accompanied the mystic trends within the three main religions and a variety of sects up until our times – witness the New Age of Aquarius.