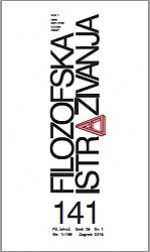 Platon i Parmenid
Plato and Parmenides

Summary/Abstract: This paper analyses the relationship between Plato’s late thought of being and eleatic heritage that is at the very core of Plato’s middle period idea thesis. The analysis shows that Parmenides’ poem On Nature represents the framework for problems regarding Plato’s thought. That is, that the establishing of the concept of idea, which is simply postulated in the middle period, must be realized through criticism of Parmenides’ thought of being. In a way, Plato’s ideas are multiplied Parmenides’ being, but as such they are always the truth of many. Therefore, establishing the concept of idea requires a critique of Parmenides’ thought of being, a critique that opens a horizon for a new way of thinking ideas in terms of being as being. Patricide is Plato’s decision for the impassable, a blunder that leads to the way of those who wander two-headed.