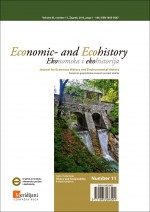 Summary/Abstract: Archival sources, mostly tenants’ inventories presented in the context of further documents from archives of seigneuries, state and ecclesiastical administration, prove that environmental, economic and societal changes in the dynamic 17th century did not affect mountainous isolated farms in the western part of Eastern Karawanks and in central Kamnik-Savinja Alps in a uniform way. I presented opportunities and pitfalls of this kind of analysis of tenants’ inventories. The method for assessing environmental loading of the 17th century animal husbandry is based on comparison of tenants’ inventories with descriptions of farms. Its fundamental components include the weight of the 17th century livestock and the relationship between feed requirements of different animal species, obtained from seigneurial accounts and visitation proceedings. I analysed cereal production with special emphasis on species diversity, quantities of home-grown grain and cereal stocks. Trade in and lending of cereals took place. Inventoried ploughing implements and damage caused by slope processes prove unsustainable use of some fields. In the case of environmentally or socially caused economic difficulties lenders were in many cases able to provide lacking resources or tolerated arrears, but the scale and characteristics of tenants’ indebtedness differed greatly. On the figure representing the sums of values attributed to livestock, cereals and of active debts from which debts are subtracted, environmental impact of bad harvests in the Late Maunder Minimum can be observed, but further factors, e.g. the extent and quality of agricultural land, non-agricultural sources of income, dowries and shares of inheritance, caused the non-uniform distribution of positive and negative balances of different farms. Population statistics prove that in comparison with the 19th century considerable numbers of inhabitants lived in the area even in the late 17th century.