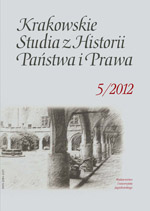 Summary/Abstract: The paper provides a brief outline of the major elements that made up the foundations for the political thought of Marquis D. A. F. de Sade. The author of the paper believes that these elements have not been sufficiently presented in the Polish historiography of political doctrines. The Marquis, being deeply anchored in the Enlightenment ideas and stylistics, was simultaneously the thinker who questioned a remarkable number of elements of these ideas. What he challenged were in particular: the previous descriptions of nature, natural state, location and status of the human being, social contract and the concept of State and law. By questioning these concepts he indirectly challenged also the major articles of the Declaration of Rights of Man and Citizen. His political concepts are detectable in most of his literary production and therefore the author of the paper treats what is detectable as a certain whole which perhaps is not fully consistent of morality and law, both those of ancien régime as well as those promoted by too idealistic concepts of the pre-revolutionary era. An interesting example of the originality of his way of political thinking was his attempt to present to the reader the two extremely different socio-constitutional models – that of classical Utopia and that of Anti-utopia – as included in one literary production. The essay is concluded with a brief attempt at the summarizing and assessing of the discussed concepts as viewed against our present-day reception of de Sade’s production and his location in the history of political thought.