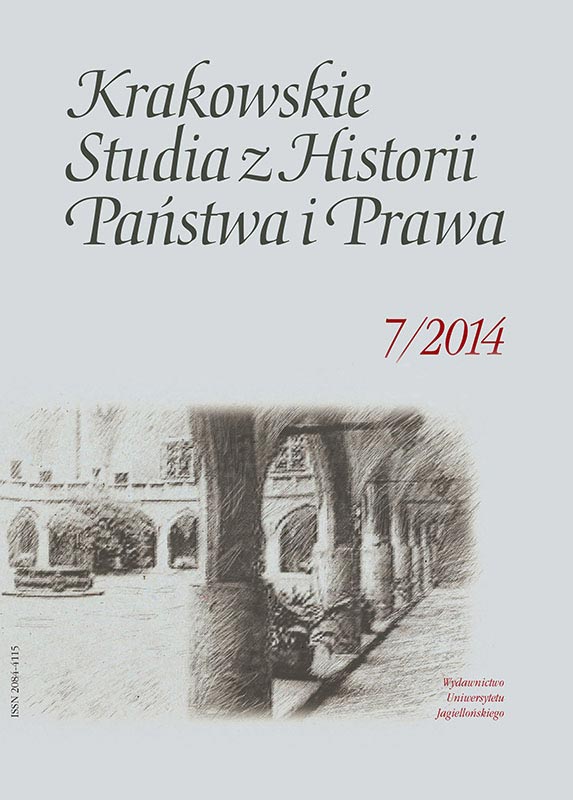 Summary/Abstract: The article is devoted to an analysis of a legal regulation of 5 April 1837 entitled Policing Foreigners in the Free City of Krakow and published during the period of the occupation of the Free City of Krakow by the armies of the partitioning powers. The above publication constitutes an interesting legal regulation chiefly due to the fact that in its title and content one comes across the term policing which had been used here as a synonym of authoritative activities undertaken by state authorities and also because the term introduced a far-reaching administrative control associated with foreigners and their stay on the territory of the Free City of Krakow. The model of administration adopted here was associated with the goals of a police state and served to preserve the existing system of power, based on its close dependence on the partitioning powers. The regulation entitled Policing Foreigners… constituted a collection of legal norms which defined the direction of the authoritative activity of the administration and marked out the legal boundaries of the state’s interference in the life of individual citizens for the realization of the state’s function consisting in maintaining order and public safety.Among some of the legal instruments which served to realize the above-mentioned goal and which were defined in the Regulation one could find: passport control, issuing of visas, obligation to register one’s stay, obligation to obtain a card of free stay, keeping official registers, control of foreigners’ stay in Krakow, as well as observation of suspicious individuals. Policing Foreigners… extended to two spheres of activity of police authorities: uniformed and superior police

O rządach prawa w Wolnym Mieście Krakowie uwag kilka Some observations on the rule of law as applied in the Free City of Cracow 2012 Artykuł recenzyjny monografii Macieja Mycielskiego, Rząd Królestwa Polskiego wobec sejmików i zgromadzeń gminnych 1815–183 The review of Maciej Mycielski’s monograph: The position adopted by the government of the Kingdom of Poland toward the Seymik’s and the Commune’s... 2012 Jubileusz Profesora Jerzego Malca Jubilee of Professor Jerzy Malec 2013 Wpływy francuskie w administracji Księstwa Warszawskiego French Influences in the Administration of the Warsaw Duchy 2013 Z orzecznictwa Dyrekcji Policji Wolnego Miasta Krakowa – casus Oszyków From the Case-law of Directorate of Police in the Free City of Cracow – the Oszyk’s Case 2016
2021 © CEEOL. ALL Rights Reserved. Privacy Policy | Terms & Conditions of use
ICB - InterConsult Bulgaria ver.1.5.1217