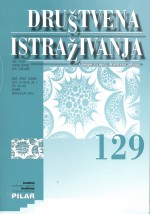 Summary/Abstract: The aim of the study was to investigate maternal verbal strategies in the process of scaffolding their children to complete cognitive tasks in the zone of proximal development, and to examine whether mothers used different verbal strategies with children of different sex. The study was conducted with mothers (N = 80) and their children (41 boys and 39 girls) aged 5 to 7. The dyads were video recorded during interaction on problem-solving tasks and the recordings were analyzed. The analysis of maternal verbal reactions was conducted after child's correct and after child's incorrect answer when children provided first incorrect and, later, correct answers. In this study there were no significant differences between maternal verbal strategies used either in the process of scaffolding children of different sex on problem-solving tasks or after the children solved the problem correctly. When children offered an incorrect answer, the most frequent maternal strategy was to encourage girls to re-think and to use the technique of scaffolding for boys. When the correct answer was given after one or a number of failed attempts, the most frequent maternal verbal strategy for boys and girls was to confirm its correctness.