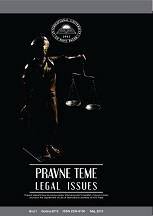 Summary/Abstract: The modern codification efforts - a delay due to the peculiarities of historical development - in the reform era have emerged, which are primarily related to proposed legislation in the field of copyright, the name Bartholomew Szemeretelep deserve mention. The freedom fight, or after the Compromise essentially been applied to the Austrian Laws. History of the Hungarian copyright law codification of successful and unsuccessful attempts are characterized. Adoption of the draft miscarriage or suggestions színvonalasságán depended on circumstances, but the historical evolution. Szemeretelep Bartholomew the 1844th National Assembly Act proposed bill did not become law due to the lack of increased royal sanction. The imperial edict and regulations after age, after the reconciliation of the Hungarian Writers 'and Artists' Society came up with - again unsuccessful - regulatory proposal. The Commercial Code, the 1875th XXXVII. However, the law has a chapter devoted to publishing the regulation of the transaction. The first Hungarian copyright act - the 1884th Act XVI. Act - Gold after Laszlo's initiative was born from Stephen Apathy presentation. The modern law, civil adapted Codification compliance, starting from the intellectual property is still not advanced theoretical basis for.