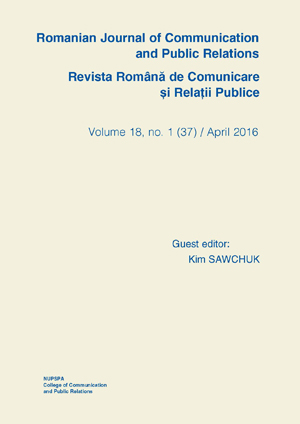 Summary/Abstract: Despite ageist stereotypes about older people’s abilities to engage with information and communication technologies, grandparents are increasingly engaged with digital media. Grandmothers, in particular, are primarily responsible for using of web-based services to communicate with their children and grandchildren (Quadrello et al., 2005). Photos and news from children and grandchildren, especially grandbabies, act as important incentives for grandparents to go online. The purpose of the study, therefore, was to investigate how grandmothers use Facebook to facilitate family communication with children and grandchildren who move far away from home. Semi-structured interviews were conducted with grandmothers living in Romania and Canada, having a Facebook account and relevant family members (children or grandchildren) far from home. Three themes emerged from the data indicating: 1) the tendency to switch between different platforms to facilitate family communication; 2) the relative passive use of Facebook, focusing on photos and quotations as content that trigger emotions; 3) that Facebook usage is influenced by social norms around decency and privacy. Findings suggest that family relationships play a central role in grandmothers’ motivations and behaviours surrounding Facebook use.