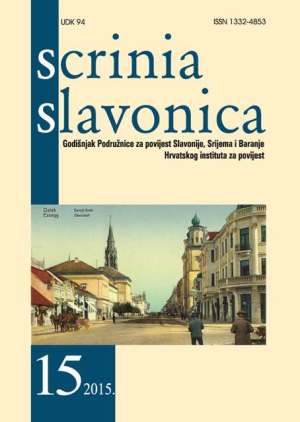 Summary/Abstract: In this paper the author analyses the activities of the Independent Democratic Party (SDS) in Slavonia and Syrmia from 1924 to 1929. The reader will be familiarised with the circumstances of the development of the party, the organization of the party’s infrastructure, the ethnic and social structure, the press and the results of parliamentary, regional and local elections. Although the Independent Democratic Party advocated the unitary dogma of a single Yugoslav nation, it was drew on the support of Serbian voters and constantly competed with the Radicals for the position of the most powerful Serbian party in the Slavonian-Syrmian territory. The Independent Democratic Party in Slavonia and Syrmia managed during the last four and a half years of the parliamentary regime of the Kingdom of Serbs, Croats and Slovenes to make itself into a significant political factor. In the territories of the Virovitica and Požega County it was in a constant struggle with the Radicals for the position of the second most important political power, while in the territory of the Syrmian County it lagged behind the Radicals. However, it did not succeed in approaching Radić’s Party which during that period succeeded in keeping the position of dominant political party. With respect to the Democratic Party that it had emerged from, the conclusion can be drawn that it attracted the majority of the members and adherents of the former united Democrats. The Independent Democratic Party in Slavonia and Syrmia drew heavily on the support of the Serbian electorate. On the one hand, this implies that the party had not entirely succeeded in affirming its unitary Yugoslav political platform, since it was evident that it was rejected by the Croats, the majority population. The struggle for the sympathy of the Serbian voters naturally led to fierce political confrontations with the Radicals, which were only temporarily calmed by the coalitions of the two parties at the level of the state as a whole. At the same time the Independent Democratic Party above all proved to be the political representative of the Serbian peasantry of the Slavonian-Syrmian area which implied confrontations with the Radicals and also with the ever-greatger influence of farmers. Various forms of para-political organization on which the unique Democratic Party had been successfully working before the party split (Peasant Councils, Voluntary Association and the Organization of Yugoslav Nationalists) considerably supplemented and thereby strengthened the power of the Independent Democratic Party after spring 1924. While monarchism and the Serbian electoral base considerably facilitated a short-term coalition with the Radicals in 1925 (National Block), the Independent Democratic Party and the Croatian Peasant Party (Peasant Democratic Coalition) shared lesser connecting features. The party leadership and certain sincere supporters of a coalition with Radić’s Party (the leader of the Party in Osijek, Milan Stijić or the Pakrac Orthodox priest Danilo Podunavac) endeavoured to ease the ideological and programme differences by emphasizing the mutual menace to both the Croats and Serbs of the transriparian Serb areas. However, other Slavonian-Syrmian party leaders (Svetislav Popović and Milenko Marković) considered an alliance with the Croatian Peasant Party to be a great violation of the dogma of the national unity of Serbs, Croats and Slovenes or a threat to the centralistic state. Hence, it would be no exaggeration to state that Alexander’s undemocratic act (probably) pre-empted a schism within the Independent Democratic Party.