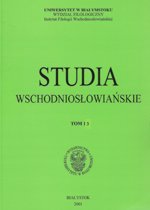 Summary/Abstract: Relocated to Warmia and Mazury in 1947, the Ukrainians comprised 10% of the inhabitants of the region. At present, Ukrainians are the most numerous minority group in Warmia and Mazury, living in the northern part of the region. A report of the Institute of Public Affairs has shown that Warmia and Mazury – as a multicultural and multi-ethnic environment – is a region characterised by a higher tolerance towards otherness and an exceptionally friendly approach towards the Ukrainian minority. This article is an attempt to outline the modern developmental trends with regard to the socio-cultural identity of the Ukrainians who live in the region of Warmia and Mazury. We also mention how their linguistic identification is shaped. Most of the Ukrainians of the older and middle generations equal national identity with using the Ukrainian language in its colloquial dialect or literary variety, while the young Ukrainians associate the language with a purely symbolic status. The youth emphasise that their culture and identity do not have to be expressed through using the Ukrainian language. After 1991, the Ukrainian minority has become increasingly assertive in using the rights granted them, encouraging local governments to subsidy their cultural programmes and support them on the organisational plane. Cooperation at the level of regions, towns, communes and districts has resulted in a number of important cultural events in the region of Warmia and Mazury. Schools also conduct cultural activity, with bands and theatrical groups actively participating in building the multicultural character of the region. The present research has shown that the compulsory cultural contact led to voluntary acculturation of some members of the Ukrainian community, and to a situation in which elements of the Polish culture are interwoven into the Ukrainian cultural heritage.