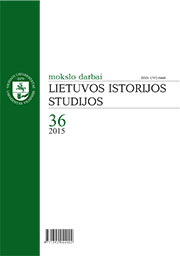 Summary/Abstract: The article analyzes the image of the Union of Krewo, which is inherent to the Russian pre-revolutionary historiography of the 19th – early 20th centuries. In other words, the article describes how the researchers perceived the Polish–Lithuanian agreement of 1385. The historiography of the Union of Krewo is being analyzed taking into account the evolution of different approaches of Russian historians to the Lithuanian history. In the first half of the 19th century Lithuania’s past was perceived as “foreign”, so all what was connected to the Union of Krewo haven’t caused great interest in researchers. The situation changed after the first Polish uprising in 1830–1831. Understanding the causes of “the Polish rebellion” and the participation of Lithuanians in it caused to rethink the history of Lithuania, presenting its past as “our history”. After the second Polish uprising which took place in 1863–1864, the ignorance of the Lithuanian history by local intelligents and its pro-Polish character were recognized as a problem. The architects of the imperial nation building start to think about the mental accession of Lithuania and the mental appropriation of its history. In response, the ideologized concept was formed, in which the Western region of the Russian Empire was portrayed as indigenous Russian lands influenced by intense polonisation. In this discourse, the Union of Krewo appeared as a turning point which changed the “right” course of the history of Lithuania, and the Poles found themselves in the role of “robbers” who stole a Russian land. The more time passed since the second Polish uprising, the less ideology and politics are found in the research of historians.