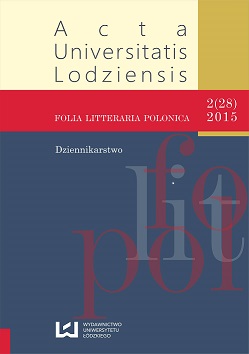 Summary/Abstract: The aim of the paper is to compare the formal organization of a visual message with the rhetorical devices used in verbal expression. This analysis is carried out based on the example of the sculpture Dual by Zbigniew Władyka. Creativity found in the rhetorical devices used in the sculpture Dual to trigger and amplify feelings proves that they can be used even in this form of artistic expression. Creativity in the analysed sculpture is represented by the unification of Germany, reflected in the form of the transformation of two characters into one. The sculpture is meant to inspire, to be an object (res) directing the viewer toward personal reflection, and invoking projections of fear and doubt, but also of confidence and courage. Confidence and courage are represented by a strong figure with a head, firmly standing on her feet. Fear and doubt are represented by a weak figure, carried by the first one. The centripetal composition used in the sculpture suggests merger rather than destruction. The sensory perception of the viewer is controlled by directional tensions, which lead the viewer’s sight along designated linear directions. As described earlier by S. Witkiewicz, directional tensions and motionless substance correspond to a rhetorical enlarging and diminishing. By interacting with the sculpture, you can experience these devices. Not only visualization is at work here, as in verbal communication, but also physical experience. The presented analysis shows that a sculptural work of art can be analysed in a similar way to verbal communication. Of course, not all verbal devices have their counterparts in visual communication, but the basic content and emotions can be expressed regardless of the code.