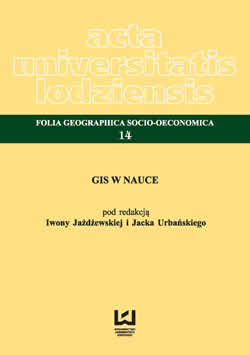 Summary/Abstract: This article aims to develop a method of acquiring land cover changes data on the basis of high resolution orthophotography derived from Polish cartographic resources. The assessment of information sources was also examined in terms of its utility in such analysis. Simultaneously, using selected example, it was outlined, how the surrounding the A2 motorway area in the Stryków community had changed between the years 1996 and 2009. Some methods and tools applied in geoprocessing and spatial analyses were also presented. Many scientific publications describe data acquiring methods based on aerial photography and ortophotomaps that can be used in land cover and land use analyses. These methods may be divided into manual (visual), semi-automatic and automatic interpretation methods (e.g. raster, hybrid, object methods). In this survey the manual interpretation method was applied due to the input data accessibility e.g. ortophotomaps that were made only in the visible light spectrum with different tone colors and contrasts for each year (1996, 2004, 2009). This research involved following steps: (1) projecting of geodatabase structure, (2) visual interpretation of ortophotomaps in order to create land cover maps for 1996, 2004 and 2009, (3) delimitation of land cover changes, (4) survey results analysis with kernel density tool in order to present the density and direction of land cover changes in the neighbourhood of A2 motorway. The research indicated the straight majority of area surveyed in the years 1997–2009, was covered by gramineous vegetation and crops. However, the percentage of this class was decreasing systematically during those years. There was also remarkable increase for industrial and built-up areas. In the neighbourhood of A2 motorway in Stryków community, the growth of woodlands, wooded and shrubs area class was also noticed. For the building A2 motorway purposes there were created new gravel-pits and excavations of sand nearby the road. That is why for the area surveyed the percentage of greenfields was larger in 2009 than in 1996.