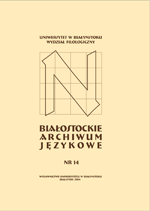 Summary/Abstract: Currently in Russia, due to the change in the political system, there is more and more noticeable impact of the Orthodox Church on the life and language of the Russians. Biblical phraseology begins to permanently enter into the realm of contemporary Russian culture. It became common among the Orthodox Russians to cite the idiomatic expressions and quotations from the Bible. In the modern language of the Orthodox Christians the meanings of idiomatic units coincide with their meanings in the texts of Scripture, which, however, is not always synonymous with the dictionary meaning.