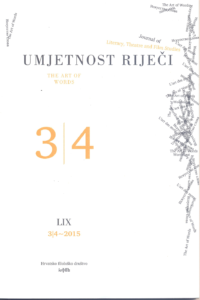 Summary/Abstract: This essay asks what happens to hegemonic discourses around gender, identity and subjectivity when the stable frame of reference within which they typically operate shatters under the pressure of cinematic and narrative oversaturation. Through a close analysis of Nicholas Ray’s film noir In a Lonely Place (1950), the article traces the representational undermining of post-WWII Western masculinity, which is revealed to be in a state of perpetual crisis. It shows how sexual difference is depicted as a key element informing the notion of agency, but with a surprising result: instead of the typical hierarchy of classic Hollywood films—in which the woman on the screen occupies a passive to-be-looked-at position (Mulvey 1975)—In a Lonely Place complicates the formula by giving its female protagonist more agency over the narrative than its male anti-hero, thereby marking the film as a provocative feminist text. In later parts of the essay, I focus on the film’s noir features such as narrative loose ends and plot inconsistencies, and what they reveal about the inherent violence of normative forms of storytelling, both cinematic and otherwise.