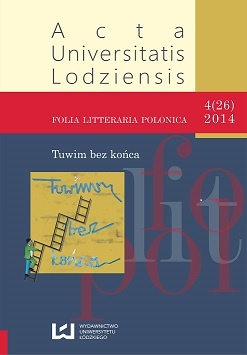 Summary/Abstract: Tuwim’s approach to the “Jewish question” has already been analyzed by Polish and foreign scholars. The article is intended to consider some “survival strategies” of the Polish poet from a slightly different angle. In Poland, in the period between the wars Jewish writers were persuaded to accept total polonization and a rejection of their ethnic identity; yet, at the same time they often suffered rejection from the circles of Polish artists. Any attempt of highlighting their Jewish identity or even a slight interest in Jewish culture incited brutal Jew-bashings. Tuwim considered his being a Polish Jew not only as a fact to be proud of, but also as an opportunity for engaging with self-criticism. He painfully felt the Jewish question as “a powerful wedge cleaving [his own] worldview”. However, like many other Polish-Jewish writers he masked its enduring presence in his own psyche, constructing his public persona through a process of self-fashioning. This paper tries to follow the traces of this “wedge” in Tuwim’s works: from poems supposedly having nothing to do with the “Jewish question”, to encrypted allusions to the great Yiddish writers, from his relentless questioning of all forms of intolerance and nationalist rhetoric, to his conviction that a new poetic language could “reform the world” and become a homeland for all readers regardless of their nationality.