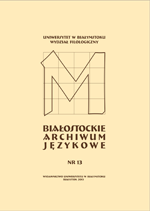 Ciało kobiece vs. ciało męskie (na podstawie werbalizacji studentów)
A female body vs. a male body (on the basis of students’ verbalizations)

Summary/Abstract: The author attempts to answer the question how students (altogether 100 respondents have been studied) conceptualize a female body and a male body. The associations with a female body and male body excerpted from the questionnaires prove that while listing their connotations, young people refer very strongly to linguistic-cultural stereotypes connected with gender and the common perception of female and male bodies. Thus, a representative of female sex is perceived, most of all, as a human being taking care only of her physical appearance who, at the same time, is weak, sensitive, submissive and subordinated to a man, whereas a male is seen as being physically and sexually fit, decisive and consistent. Students’ utterances once again confirm the patriarchal system of Polish culture which very strongly creates the axiology of gender.