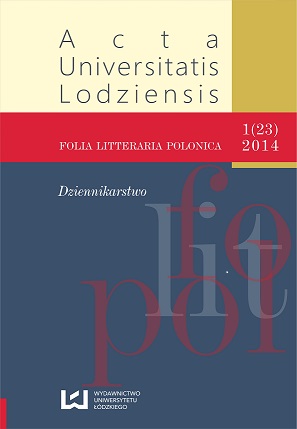 Summary/Abstract: The article analyses a collection of 52 editorials published in 19 national journals between 1989 and 2011 directly following general elections. The purpose was to establish how an editorial in the Polish daily press of that time evolved, if it was a form used by editors to make official statements about important social events, how the relationship between texts’ functions were shaped, and how this affected the meaning content of published material. It was established that at first editorials highlighted the fundamental significance of the results of general elections for the creation of a new political and social order in Poland and emphasized the obligation this imposed on both voters and those seeking election. In the mid-1990s, authors regarded the act of voting as an important and proven tool for putting public life in order that did not always serve its purpose. In the 21st century, publicists were more inclined to perceive the mechanisms of democracy through a personal dimension. The editorial gradually drifted away from being a text which focused on the election and participation in it as exceptional and seminal. It started to become a collection of the author’s personal evaluations and of conclusive opinions on the current political situation. Not lacking in judgmental statements, it was meant to provide an understanding of a situation rather than to urge to a specific action. Commentators evaluated the outcome of each election, referring to detailed issues, such as turnout, the potential, anticipated difficulties the winner of an election would face, and the factors that would determine the outcome. The anticipation of upcoming events remained an essential feature of the editorial; authors, however, gradually retreated from advising politicians on specific solutions.