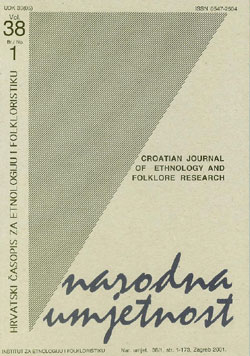 Summary/Abstract: The basic stimulus for this research was the widely disseminated conviction that women do not play folk music instruments, and particularly that they did not play them in the past. It turned out that both components of this thesis are faulty and that the in/visibility of the women players depends on (ethno)musico-logical and social canons. Their invisibility in ethnomusicology has been an outcome of the ethnomusicological limitation to folk music, its products and its most prominent representatives. Women players' positions as members of a family and as participants in national-integrating and modernizing processes during the second half of 19th and the first half of 20th century made it possible for their musicianship to prevail over their gender. These were also the positions which women players shared with men players. The remaining women's positions were based precisely on certain stereotypes on women (from the woman player as a member of so-called fairer sex, to the woman player as a shameless woman, and the reverse of the stereotype in the woman player as a mannish woman) or on the (self)negation of serious musicianship (the woman player as a substitute for an absent man player, and the woman player of handy and substitute instruments).