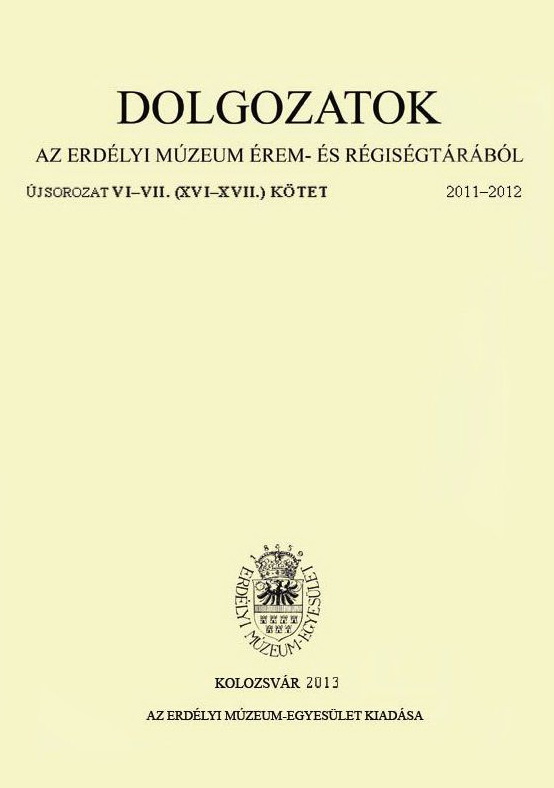 Summary/Abstract: The Avar-Age was one of the longest and most significant phase of the Early Medieval history of the Carpathian Basin. More than 60000 – usually richly furnished – burials are known from this period lasting from 568 to the first half of the 9th century. During these centuries the burial customs were agreeable to the analysis of some elements of the material culture including the weaponry. The actual paper is an attempt to analyse the fighting technology of the Avars by means of two major types of close-combat weapons – the cutting or edge weapons (i.e.: swords, sabres and seaxes) and the polearms (spears, pikes and javelins) – of the Carpathian Basin from the 7th–8th centuries. The reasons for selecting these two weapon types are their relative big quantity and formal variability. Hereby I analyse these weapons from the whole timespan of the Avar Period (that means from 568 to the first half of the 9th century); this way the material is useful not only for the synchronous but for the diachronic investigations as well. The written sources offer scarce information on the Avar army: most of them cover the first half of the Early phase according to the archaeological chronology-system, and mainly draws attention to the Avar – Byzantine wars which ended by the siege of Constantinople in 626. After a long silence, the recovery of written evidence came at the end of the 8th century and beginning of the 9th century when western sources offer detailed description about the Frank – and after Bulgar – Avar wars from 791 till 803. Except from these occasions there is hardly any written evidence for the large part of the military history of the Avar Khaganate. Therefore the archaeological data available mainly from mortuary assemblages become extremely important. It is a well-known fact from the early written sources that the Avar army cannot be considered as homogeneous; it was made up by several co-operating divisions such as heavy- and light-cavalry, infantry, fleet, artillery and engineer corps. It included warriors from different ethnic groups (Avars, Kutrigurs, Gepids, Slavs and even Byzantine renegates). According to the written evidence the Avars were one of the main military powers which could effectually confront with one of the biggest and most multi-faceted force of that period: the Byzantine imperial army. One of the major questions of this paper is, whether this fact is reflected by the archaeological material or not? Furthermore this material is apt to demonstrate some major changes in the armament of the Avars from the late 6th to the early 9th century. This analysis is based on the formal classification of both the polearms and the cutting weapons. The main attribute used to classify these objects was the blade of the weapons, which is probably also suitable for the identification of their original function. The polearms form a considerable part of the Avar weaponry, 577 examples are known recently mainly from male or horse burials. By the physical properties of these weapons some functional observations can be made. The spearheads with narrow reed-leaf shaped blade (L.I) with their rhomboid cross section and thick neck is suitable to bear frontal impact without bending or breaking. Because of these physical attributes this group together with the II. group may be identified with pikes used to break through the armour of the foe. This type can be connected to the heavy armoured cavalry, which played a considerable role in the 6-7th century due to the extensive application of the newly appeared stirrups which increased the effectivity of this division. According to the written sources the main weapon used by this cavalry was a long shafted polearm called kontos or kontarion in the Byzantine sources. A large part of the polearms of this period is composed of spears with wide leaf-shaped blade. Since its blade usually bends or breaks in the case of frontal impacts as shown by several injured examples – this type was not suitable for using it as a pike. Its main area of distribution lies in Transdanubia together with some features which links this region to the Merovingian world. This type was mainly combined with umbos and double-edged swords with wide blade and fuller: the so-called spathas. This could be the armament of the infantry composed mainly – but not exclusively – from the local Germanic or Slavic population. The cutting or edge weapons are far less suitable for such investigation, although general trends could be observed in their evolution. The number of the cutting weapons exceeds the quantity of the polearms (674 examples are known at present). The classification of this weapon type resulted in four major groups based on the blade: double- and single-edged swords, sabres (with curved blade) and seaxes. In general, the following trends can be observed: the decline of the usage of the double-edged swords and the appearance and general spread of the single-edged swords and sabres. Henceforth I will concentrate on some of these processes: 1. the transition from double-edged to single-edged swords, 2. the formation of sabre, 3. the increasing importance of seaxes in the late phase. The Avar army could successfully confront with the Byzantine military forces in the late 6th and early 7th century and gave various contributions to its development shown by the Stategikon of Maurice. Although the Avar Khaganate lost its political significance in the later period which is reflected even in the weaponry. Judging by the aforementioned phenomena the Avar army gradually lost its effectivity and technological superiority which is reflected both in the archaeological and written sources concerning the late phase of the Avar Khaganate.