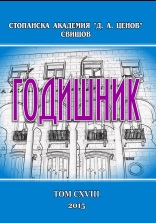 Summary/Abstract: Since the financial crisis in 2008, the EU member states have not been able to reach their pre-crisis GDP growth rates for already seven years (the study was conducted in the beginning of 2015). Most of them face the effects of deflation as a new factor that delays the process of post-crisis recovery. Thus the public debate revolves around the logical questions whether and to what extent a policy of public sector expansion by increasing government spending can change the established trend and restore the growth rates. The aim of this study is to determine whether and to what extent a Pan-European expansionary government policy for post-crisis recovery would be efficient and could provide positive economic results. The first section presents an analysis of the causes for the global financial crisis. The second section contains a critical analysis of the Keynesian theory and the business cycles theory of the Austrian Economic School as well as a comparative analysis of the fiscal positions of the EU member-states before and after the crisis and an outline of the new trends. The third section reviews Bulgaria's net fiscal position and its effect on the GDP growth in before, during and immediately after the peak of the crisis. The fourth section reviews the currency exchange rate adjustment of the imbalances of the open economies of the EU and the US as a possible factor for their different rates of post-crisis recovery. The study contains eight tables, five figures and 26 cited sources, eight of which are in Bulgarian. The research methods include comparative analysis, correlation analysis, induction and deduction. The analyses are conducted with monthly and annual data from January 2000 to January 2015 (the last period prior to submitting the study.)