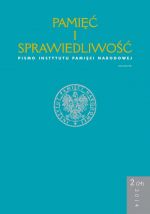 Summary/Abstract: The article describes diplomatic operations carried out by Poland’s MP and executiveminister in Sofia Adam Tarnowski, one of the leading representatives of Polish diplomacyin the Second Republic of Poland. He was the longest serving Polish diplomat in the Kingdom of Bulgaria (1930–1941). Later he emigrated to London to hold prominent functions: a general secretary of the Ministry of Foreign Affairs, an MP in the Czechoslovakiangovernment in exile, Minister of Foreign Affairs during and after the war in the governments of Tomasz Arciszewski and Tadeusz Bor-Komorowski. Chronological dividinglines of the study are: the fall of Poland in September 1939 and Bulgaria breaking off itsdiplomatic relations with Poland in March 1941. At that time, the Polish diplomatic post in Sofia was one of the very few legations which dealt with diplomatic issues despite the German seizure of Poland. When the war had broken out, Tarnowski began conductinga serious diplomatic campaign towards establishing contacts with his occupied motherland,helping people threatened by Nazi repressions, and informing foreign governments of crimes and destruction taking place in Poland. Tarnowski was supported by a group of Bulgarian diplomats sympathising with Poland. They stayed in Berlin and occupied Warsaw and provided priceless services to our country by carrying money, letters, and information about the Nazi crimes in the occupied Poland in their diplomatic bags. Our MP in Sofia would give shelter to Polish refugees, protect valuable objects belonging to the national heritage, and organize redeployment of Polish troops from Bulgaria into Turkey. The most spectacular operation managed by Tarnowski was the evacuation of a group of several dozen Polish airmen (in September 1940) by sea from the Black Sea coast to Turkey. A very important element of Tarnowski’s operations was the intervention with the Bulgarian government to help Polish scientists from the Jagiellonian University and the AGH University of Science and Technology arrested by Germans in November 1939. Tarnowski talked to Professor Bogdan Fiłow, President of the Bulgarian Academy of Science, a world famous archaeologist, who was about to become Prime Minister of Bulgaria. The sources of the article include: unknown historical documents from AAN, published diplomatic and intelligence documents, journals and recollections. Bulgarian sources and analyses, including video footage, were also used.