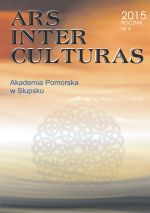 Summary/Abstract: Multicultural inspirations in the works of modern composers from Gdańsk are phenomenathat became a part of tradition, social structure, geographical situation, and the historyof Gdańsk. In the diversified musical environment of the post-war Gdańsk, the threegroups of composers active in the city are recognized. The first group includes the native- born composers; the second group consists of composers who came from differentparts of Poland and settled in Gdańsk; the third group (the most difficult to compartmentalize) includes composers temporarily living in the city. The examination of artistic achievements of Gdańsk composers after the Second War World reveals three distinct domains of multicultural inspirations. The first involves cultural fascination with remote places of Europe and the world. The second draws on inspiration from the native folk culture, including the Kashubian folklore. The third domain borrows from the mass culture that aspires to the rank of sophisticated art.