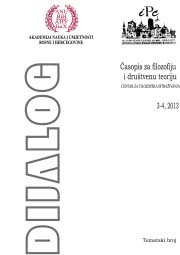 Summary/Abstract: The paper analyzes some characteristics of religious violence as one of the most prevalent forms of violence in the modern world. The paper traces the roots of religious violence and sees them in spreading the faith as “combat” religion, that is the religious ideology that does not tolerate others and different, there is no tolerance for diversity and is used as an instrument for the internal homogenization of religious communities. The very special moment in the work is presenting the thesis that the faith and religion are not the same, that they are conflicting facts in the life of human. The faith is simulated, alienated and imposed “objective religiosity,” while religion is internal, unique, indivisible, unexplained mental, emotional and moral strength of man, the individual.