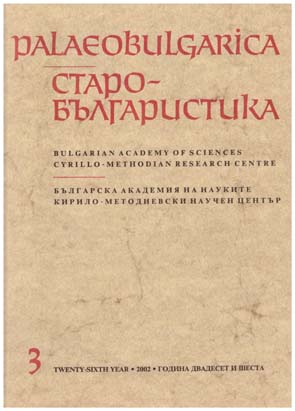 Summary/Abstract: The article presents already non-existent inscriptions on frescoes from the destroyed church at the village of Ruzhdavitsa (near the city of Kyustendil), documented during the first half of the 20th с. According to various studies, the paintings date from the 14th–15th of 17th с. The analysis of the liturgical passage (from Basil's liturgy) shows that they can be connected with the Pre- Euthymian tradition and correspond to monuments of the first half of the 14th c. The linguistic characteristics of the texts illustrate two tendencies: a more archaic and a typically Middle Bulgarian one, without indications of Serbian influence. The data in their entirety bring the Ruzhdavitsa inscriptions close to those of “St. Peter” Church (1331 – prior to October 1332) at the village of Berende and “St. Nicholas” Church (1331–1332) at the village of Stanichene, Nish area. On the basis of the analysis it may be assumed that the inscription date from the first half of the 14th c., probably after the Bulgarian-Serbian war in 1330.