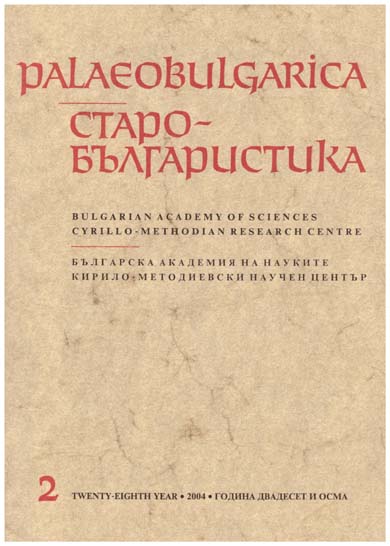 Summary/Abstract: In the article some details in the illumination of the Assemani Evangeliary (Cod. Vat. Glag. 3) and their relation to the illumination of the Zographou Tetraevangelion (St. Petersburg, RNB, Glag. 1) are analysed. On the question whether the Codex Assemanianus is older than the Codex Zographensis (the illumination of which is less skilled and, as it were, imitating the former), the views of B. von Arnim, В. Velcheva and Iv. Gulubov are quoted. They point out that the Zograph Gospel, written in NE Bulgaria during the second half of the 10th century, shows graphic features and a spelling system that are close to the first part (leaves 1–116) of the Codex Assemanianus. The second part, closer to the Cyrillo-Methodian protograph, was evidently written in Western Bulgaria but not later than the end of the 10th century. The illumination of the codex Assemanianus with obvious reminiscences of the book ornamentation of Late Antiquity points to Constantine-Cyril as its creator and inspirer, which confirms the thesis that the Vatican copy is a diligent, albeit indirect, copy of a Cyrillo-Methodian model.