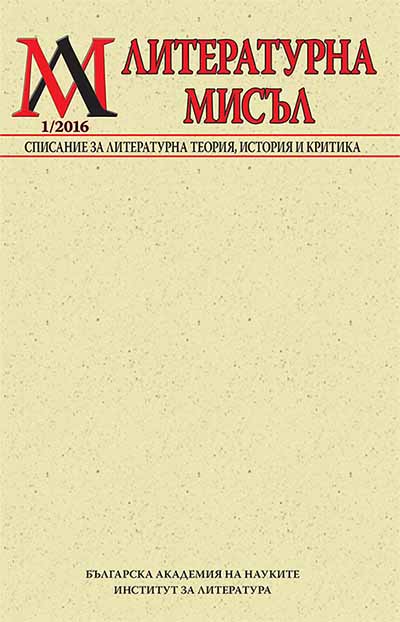 Summary/Abstract: The text is dedicated to some critical plots in the Bulgarian literature of the 20-th century - the attitude of the "Misal" journal to Ivan Vazov; the escalating topic of renegation after the transition of "the four" (N. Furnadjiev, As. Razcvetnikov, A. Karaliychev, G. Tzanev) from Georgi Bakalov's "Nov Pat" journal to Vladimir Vasilev's "Zlatorog" journal; the polemics involving Ivan Radoslavov and the "Hyperion" journal about the fate of Bulgarian symbolism; the actualization of the problem of plagiarism; the debate about hereditary rights over the new poetic language; the tension between left and right literary editions in the period between the two world wars, and the dangerous political consequences it caused after 09.09.1944. The plots in question are examined in the context of the larger topic of the activation of the literary myth Vladimir Vasilev and its metamorphoses in Bulgarian cultural life. The text synthesizes and develops further ideas, rooted in the book "The literary myth Vladimir Vasilev", published by the author in year 2000.