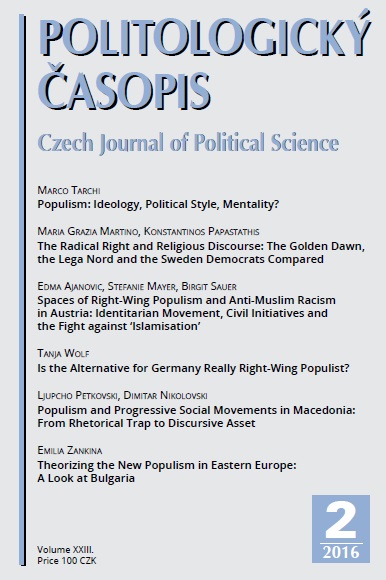 Identitarian Movement, Civil Initiatives and the Fight against ‘Islamisation’

Summary/Abstract: This article argues that the current right-wing social movements in Austria are taking part in a rightwing populist hegemonic project relying on anti-Muslim racism, anti-immigration sentiment and xeno-racism (Fekete 2001). Analysing texts and interviews of two right-wing populist social movements, the Identitarian Movement and the Civil initiatives against the building of mosques, with a critical frame analysis approach, the paper identifies their spaces of political action with the aim of understanding their success. We argue that, rather than competing with the Austrian Freedom Party in the space of national (party) politics, these movements have established their own niches in the Austrian political space. This strategy not only enables them to co-exist with the main right-wing populist actor, the Freedom Party, in a mutually supportive environment, but it also broadens the right-wing populist discursive strategy of constructing a double antagonism between ‘us’ and ‘them’ (the Elite) and ‘the others’. Hence, while the Identitarian Movement is concerned with meta-politics on the level of the ‘supra-regional’ space which is understood to shape European culture and ‘ethnic identity’, the civil initiatives’ niche is located on the local level and is presented as the space where conflicts between ‘us’ and ‘the other’ are experienced. In our approach of analysing spaces of political action, we argue that recent right-wing populism is successful because it manages to ‘diversify’ spaces of action and to colonize all levels of social life with its idea of antagonistic politics.