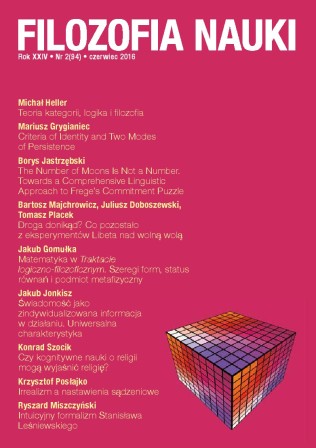 Summary/Abstract: At least since Aristotle, logic was considered to be a tool (organon) in the service of philosophy. It was not until the 19th century that logic started to create its own field of research and be ready for unexpected applications. However, it is category theory that has drastically changed the entire perspective: in this theory logic is no longer a tool that can be applied to a given structure (be it a mathematical model or a physical theory), but rather it is its part or an aspect. Moreover, a given category itself determines the kind of logic that corresponds to its inner structure. The paper briefly recalls those aspects of category theory which are relevant to this set of problems and discusses the consequences of this new approach for philosophy of mathematics and philosophy of physics. Category theory also sheds light on the mutual relations between logic and philosophy in general. The possibility that it is not necessarily classical logic that should be applied to some fundamental problems of metaphysics motivates a more “apophatic” approach to philosophy.