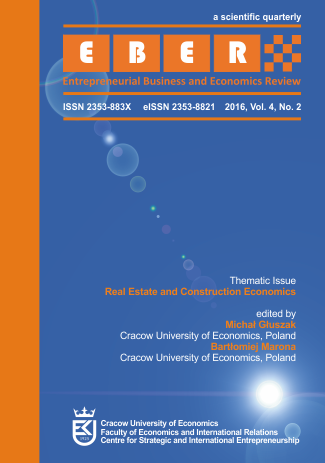 Summary/Abstract: The main topic of the current issue is Real Estate and Construction Economics. The theme was not extensively addressed in any of previously published thematic issues, with the exception of few conceptual and original research papers (Trinkuniene & Trinkunas, 2014; Płaziak & Szymańska, 2014). According to Savills (2016), in 2015 the global value of real estate assets (i.e. residential, office, retail, industrial, and agricultural land) was higher than the value of equities, bonds and gold combined. Paradoxically, despite the local character of real estate (and fixity of its location), the real estate market has become more global. Real estate and construction have always been an interesting and important topics in applied research, and occupied a well-developed niche within economic and managerial literature. Nevertheless, it was not until the global financial crisis that it became a subject of mainstream investigation within finance and economics. Since 2008 a substantial body of theoretical and empirical evidences has been gathered that investigate the links between real estate, macroeconomics, finance (Davis and Nieuwerburgh 2014), as well as their impact on urban development and society. Growing awareness of these relationships among the public and policymakers can be crucial when facing challenges of post-crisis globalizing world economy. As noted by Robert Shiller in his Nobel Lecture: “Had there been a well-developed real estate market before the financial crisis of 2008, it would plausibly have reduced the severity of the crisis, because it would have allowed, even encouraged, people to hedge their real estate risks” (Shiller 2014, p. 1511). That particular remark is true not only in US, but also in emerging markets context. As real estate and construction is not limited to purely financial and macroeconomic perspective, the current issue aims to address a range of contemporary research problems. While authors differ in theoretical and empirical approaches, the major link between most of the thematic papers published in this issue is the problem of perceptions, preferences and decision-making of different agents within broad real estate sector.