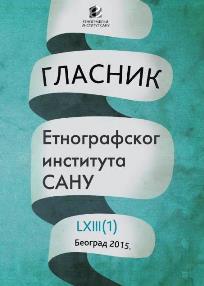 Summary/Abstract: In this paper we deal with ethnically diverse categories of residents of the Duchy and the Kingdom of Serbia in national censuses conducted between 1834 and 1910, with an accent on those conducted from 1862 – the period when official state statistics institutions were established. We do not deal foremost with numbers and statistical analyses, but with censuses as such –as we consider censuses to be an important instrument in the hands of the state which has the power to count, delineate and categorize the population. In this pa-per we give special attention to the relationship between the census officials and (ethnic) minorities: when and in what measure the interest in counting and documenting “others” emerges in Serbia, how they are categorized, which terms are used for minorities as such or various groups specifically, and how the data on these is interpreted. From this a certain image emerges – an image of the relationship between the state and ethnic “others”. This research displays a prominent tendency in this historical period to view minori-ties not as an integral part of the state and society, but as an alien, foreign body in it. Also, the meaning of the existence of ethnically diverse groups is often minimized, due to their alleged small numbers. Even though valid conclusions on the position of minorities in the state and society would require more thorough research and more sources, we consider the way in which ethnically diverse groups of citizens were treated in state censuses as very indicative in this sense.