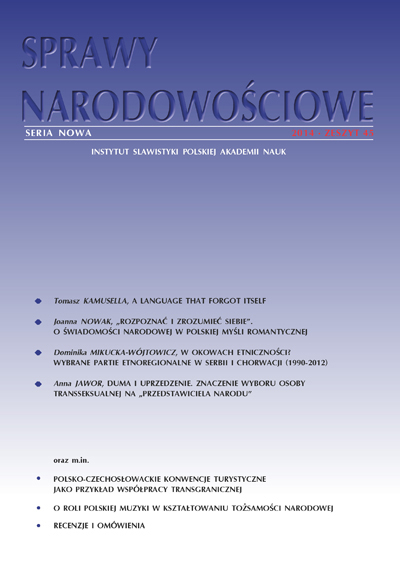 Summary/Abstract: The awareness factor commonly termed as “national awakening,” in the Polish Romantic reflection was considered the utmost determinant of national maturity of community. In the opinion of Polish romantics, national awareness seen in a broader societal sense was a relatively new phenomenon (for some authors it originated in the late 18th century, for others in the early 19th century). Earlier, the nation did exist but it was not firmly established and remained “salient.” On the basis of the 19th century sources, this article analyses some major topics of the Romantic period discourse on nation. These issues included, first of all, the meaning of national awareness and understanding of this idea as time progressed. Moreover, questions concerned the exact moment when a conscious picture of a national community came to exist, thus certifying that a mature form of nation finally originated. Moreover, this romantic discussion concerned spatial conditions of the development of national awareness (dependence of the distance from the national centre) and focused on social acceptance of this idea. According to romantic authors, the process of self-definition of a nation consisted of two stages. First, national identification was not intellectual but sensual; only at a later and more sublime stage; mature national awareness came to exist. As far as a more practical aspect of this issue goes, the contemporary aim was to expand national awareness gradually so that it could possibly be experienced by all members of nation, and not only by its political and intellectual elites.