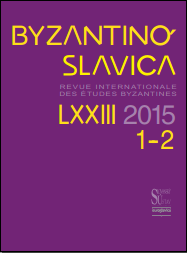 Summary/Abstract: In the Byzantine era, Hagia Sophia was mentioned and extolled in a large number of texts, ranging from rhetorical to historiographical and hagiographical. This article provides an overview and discussion of the relatively few early and middle Byzantine narratives about Hagia Sophia, which witness the various roles the church could assume in imagination and ideology. The author concentrates on the ninth- and tenth- century narratives and argues that their writing was dictated by various considerations including the clash between the emperor and the patriarch, intra-ecclesiastical conflicts, and the belief that the age of holiness and piety had not yet ended. The author focuses especially on the Narrative about the Construction of the Temple of the Great Church of God, which is called Hagia Sophia, and the circumstances of its creation. Its writing must be placed in the last decades of the ninth century and should be associated with the opposition of the supporters of Patriarch Ignatios to Patriarch Photios and his circle.