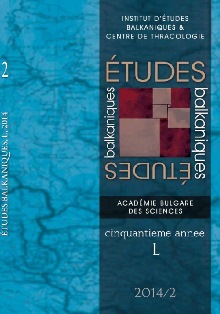 Summary/Abstract: Albania was of crucial significance for the activities of the Internal Macedonian Revolutionary Organization (IMRO) as its second major operational base after Bulgaria. However, it was not set up as such directly from Bulgaria, but from Italy, with the latter’s political and logistic support. In the 1920s IMRO managed to establish cooperation with representatives of the Albanian authorities at all levels of state government. IMRO’s primary goal was to establish direct contact with Ahmet Zogu, President and, after 1928, King of Albania. After failing to achieve this undertaking for a number of reasons, at the turn of the 1920s IMRO made an attempt to consolidate its positions in Albania by supporting the efforts of the Bulgarian state to ensure political and cultural (denominational school) rights for the Bulgarian minority in the country. Italy supported the activities of IMRO to the extent to which they was directed against Yugoslavia, but it was not inclined to encourage the expansion of the Bulgarian influence in Albania. Ultimately, the Bulgarian minority in this country continuously diminished in number.