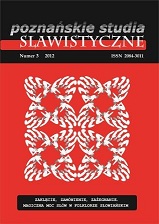 Summary/Abstract: This paper offers an analysis of (prevalently feminine) curses which come to being within the text of the epic songs. This specific form of cursing is particularly pointed in the curses by mother’s milk. Both in tradition and in the epics, these curses are equal to taboo, which means that nobody dares disobey them: such is the deep belief in their efficiency. Because there is no discrimination in the epics about who can or cannot make a curse (everybody can: narrator/singer, protagonists, antagonists, heroes and their foes, messengers, mothers, wives, godmothers, sisters, brothers, fairies, forests, etc.), focusing on the parental and lovers’ curse is necessary for the sake of congruence. This will help in spotting the interactive patterns in the structure of epic songs more accurately. The analysis is done on the corpus of approximately 1500 epic songs described at the end of this paper.